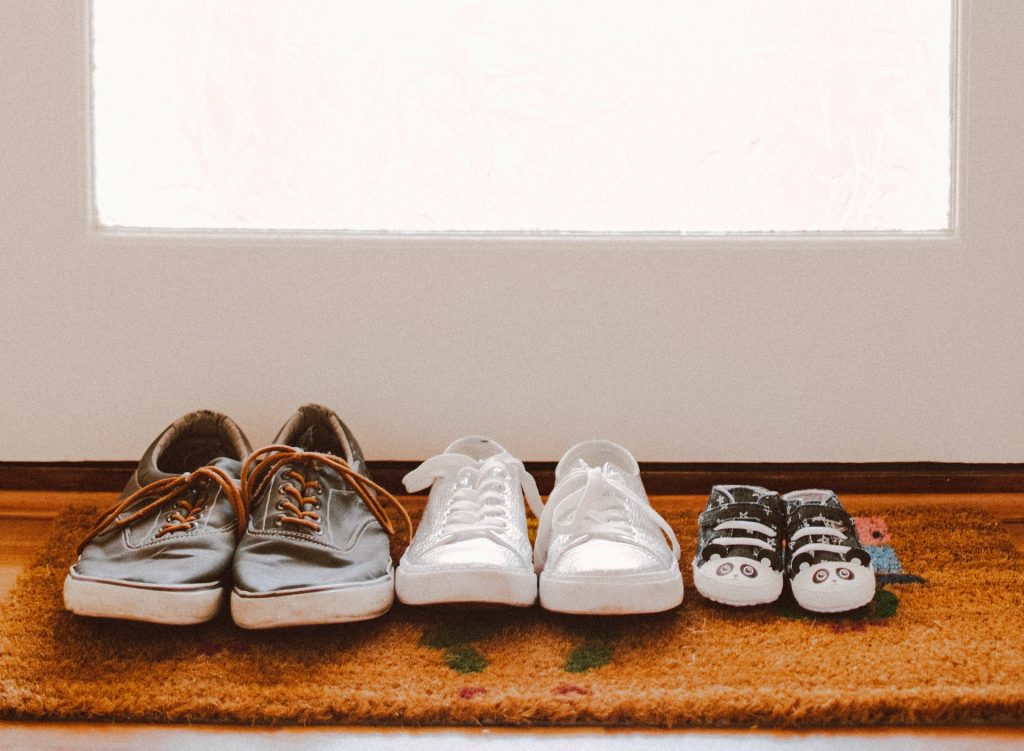 Being one million months pregnant, the subject of our expanding family, and how we plan to navigate this change has, understandably, become a hot topic at our house.

Yesterday we had a few people over, one of them a wonderful lady who I’ve never met before. After I’ve shared with her my thoughts on the separating strategies commonly chosen by parents, she said something that made me think. She said, “don’t get me wrong, but you’re a couple with a child, not yet a family.”

She had her facts straight, no doubt about that, so I had to agree. But something about this definition didn’t feel right, and I needed some time to unpack it.

A few hours later, I knew where my heart was on the subject and the depth of these definitions, where they come from, and what they mean about the way the nuclear family cell commonly looks like. 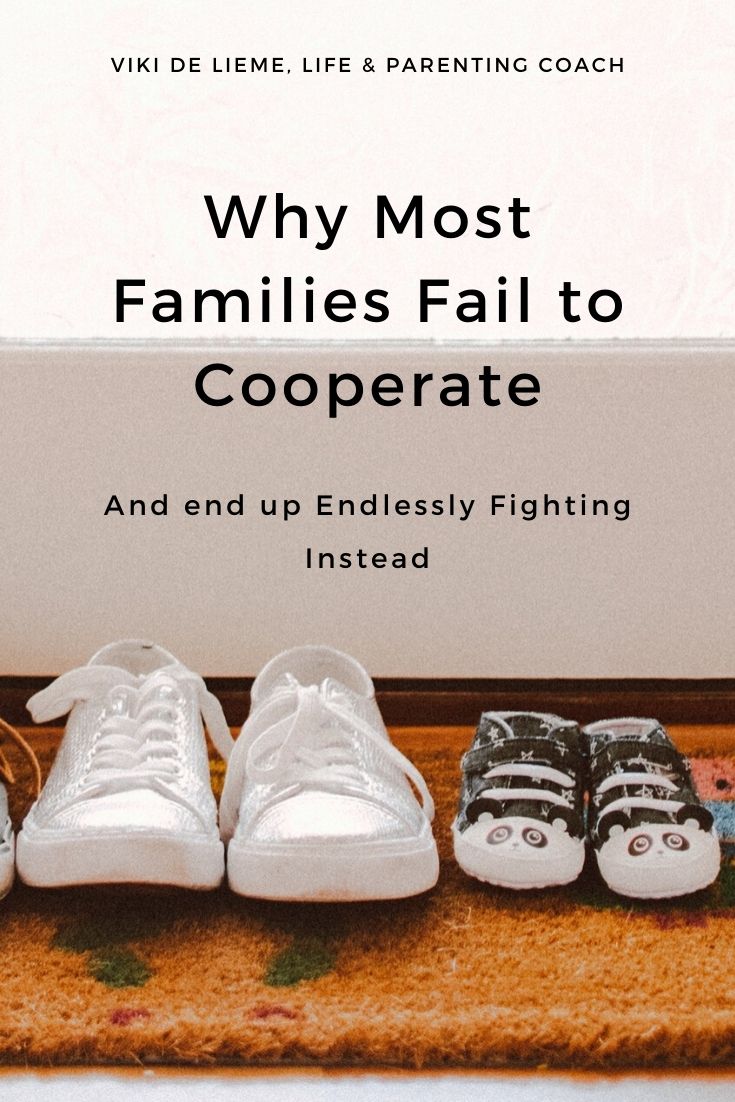 Our Underlying Perception of Relationships

When two individuals join hands, hearts, dreams, and lives, and choose to spend the rest of their lives together, they create a separate, new being between them – their relationship.

Here’s how relationships are commonly represented: 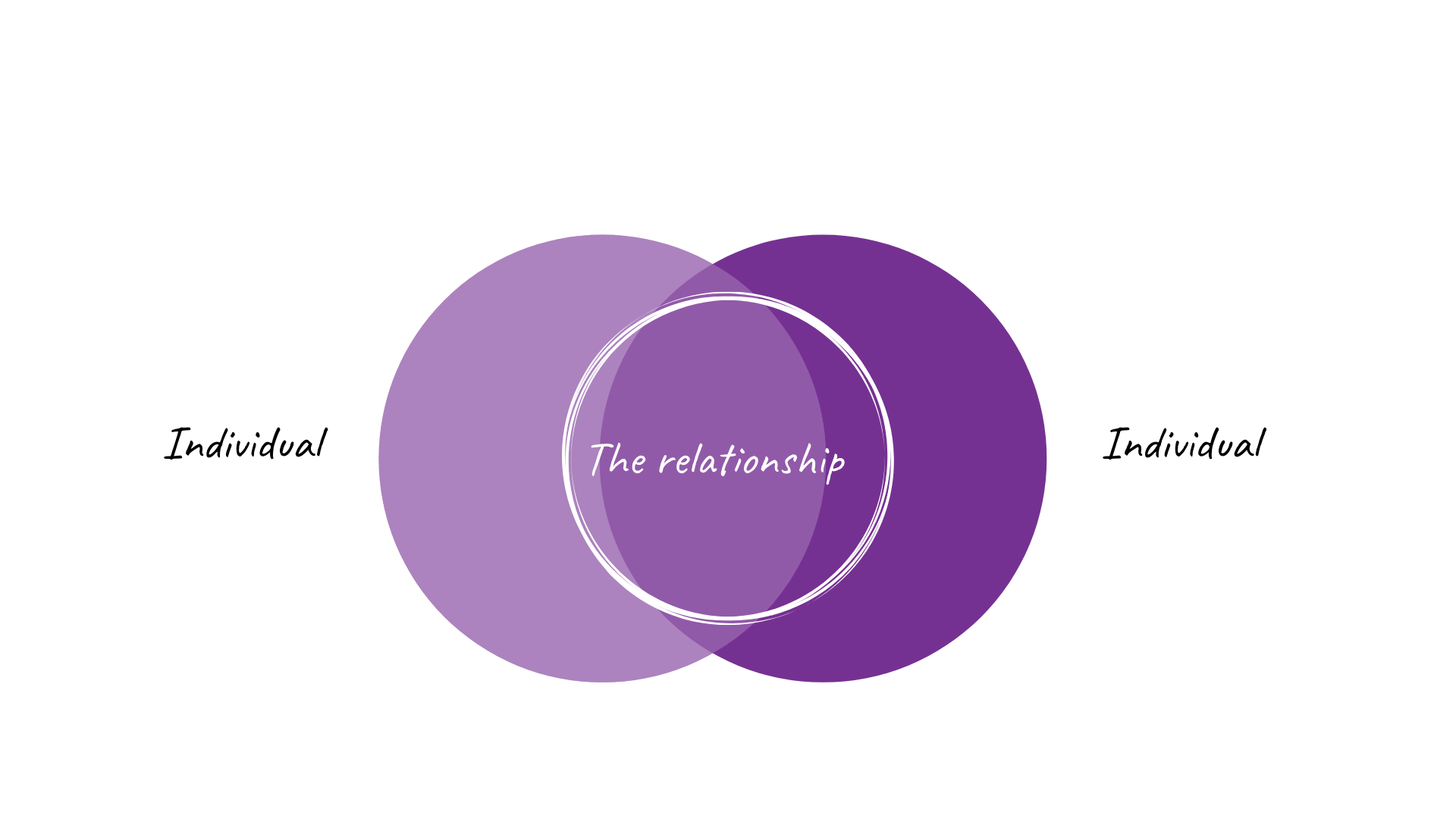 But what happens to us, to these couples, to our society, while we build lives and families within this perception?

When we initially live separation, when we view what each of us brings into a relationship as a part of him he is giving up on, our relationship is no longer composed of two whole individuals – it is composed of what we are willing to give up for the sake of the other.

When the family cell is comprised of what we are willing to give, we are automatically broken into givers and takers, doers and non-doers, we start making lists, counting, comparing. We fall into perceptions of “more” and “less,” and we let these perceptions affect the way each of us brings himself into the relationship.

While this might look like cooperation at first, it soon becomes a joint bank account of deeds, and each individual is usually in overdraft in the eyes of the other.

I will do the dishes if you will do the laundry. But if you won’t do the laundry, I will do both and resent you for it – and it will be forever “listed” in my mental notebook. Very early into most relationships, we stop doing for the sake of doing, for peace and happiness, and we start doing for the return that we expect to receive. And this is the perception most of us operate within when we bring children into this family cell. This is why most of us choose these strategies of separation – because we are already there – we are no longer “a relationship” – we are two broken individuals operating in the same sphere we now call “a family.”

Doing things alone is easier. When you’re responsible for one child, and I’m responsible for another – we both get to it our ways. We don’t have have to talk, communicate, share, or even meet each other’s struggles. We get together after everyone had gone to sleep. Separately.

We bring up our children onto this perception of separation, make them a part of it, “force” them to give up on parts of them for the sake of the family cell. If we did it for them – they should do it for us, too. If I did this for you when you’ve asked me, so – why are you not doing that for me now? 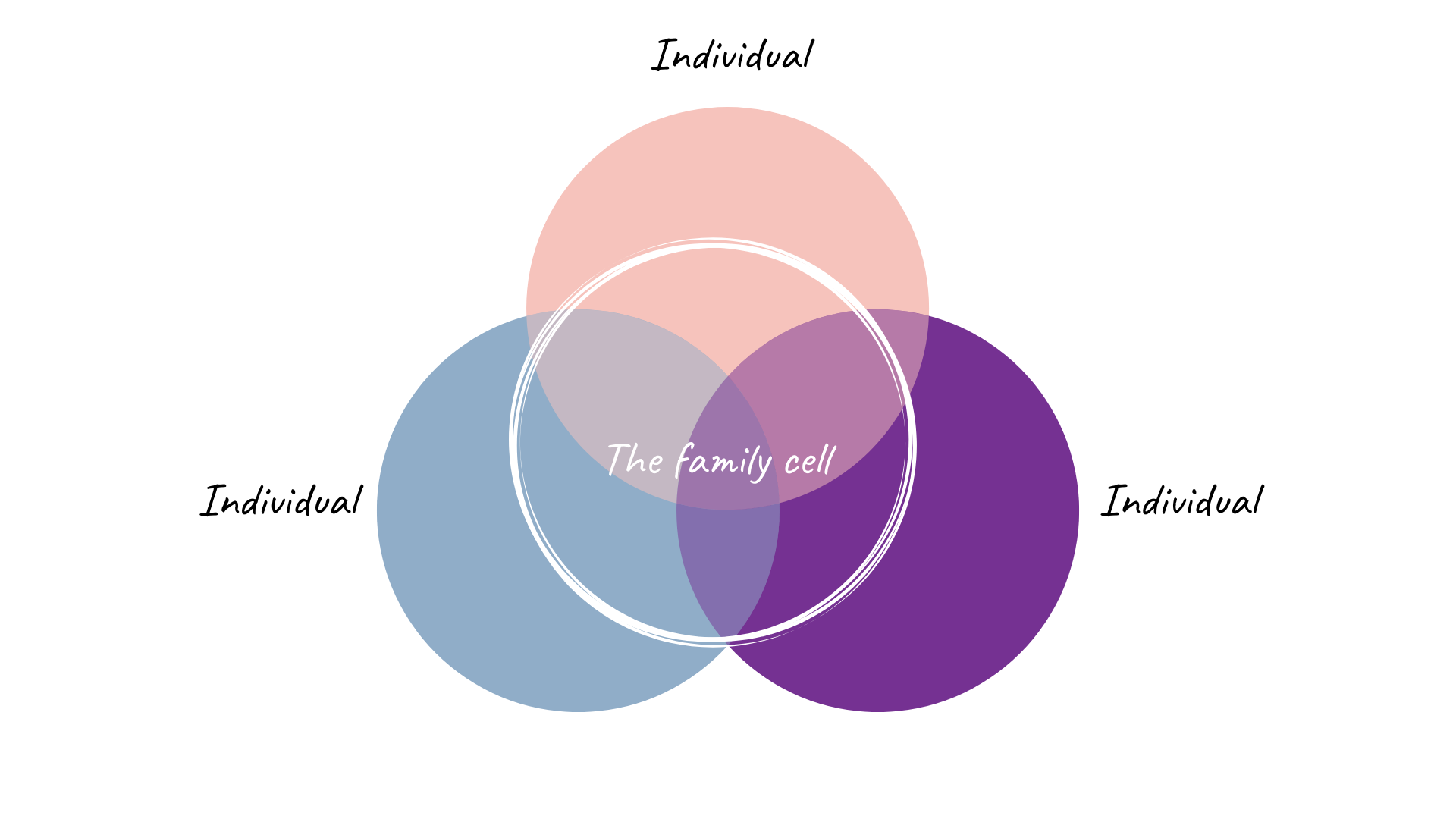 I do everything for you, and this is how you repay me – this is how it works. This is how, generation after generation, we separate ourselves and our children from the internal motivations that all human beings share – the fundamental and pure needs of being good to and for the ones we love.

Would you believe me if I told you that this is the reason behind all the pain and suffering families endure?

We don’t know how to be together. We don’t know how to choose “together” over “alone.” We’re not familiar with the beauty and serenity of overcoming together, of joining efforts, of choosing connection. We’re not familiar with the concept of the genuine connection of hearts, whole hearts, that see and feel the needs of the other before the others see them, themselves. Because they haven’t lost themselves in the process.

We’re not accustomed to the idea of expanding the love around us to include us all, as we are: perfectly imperfect human beings who thrive when making each other happy. Who don’t count deeds, words, and actions; who don’t list words and signs of affection. Individuals who simply ARE, together. 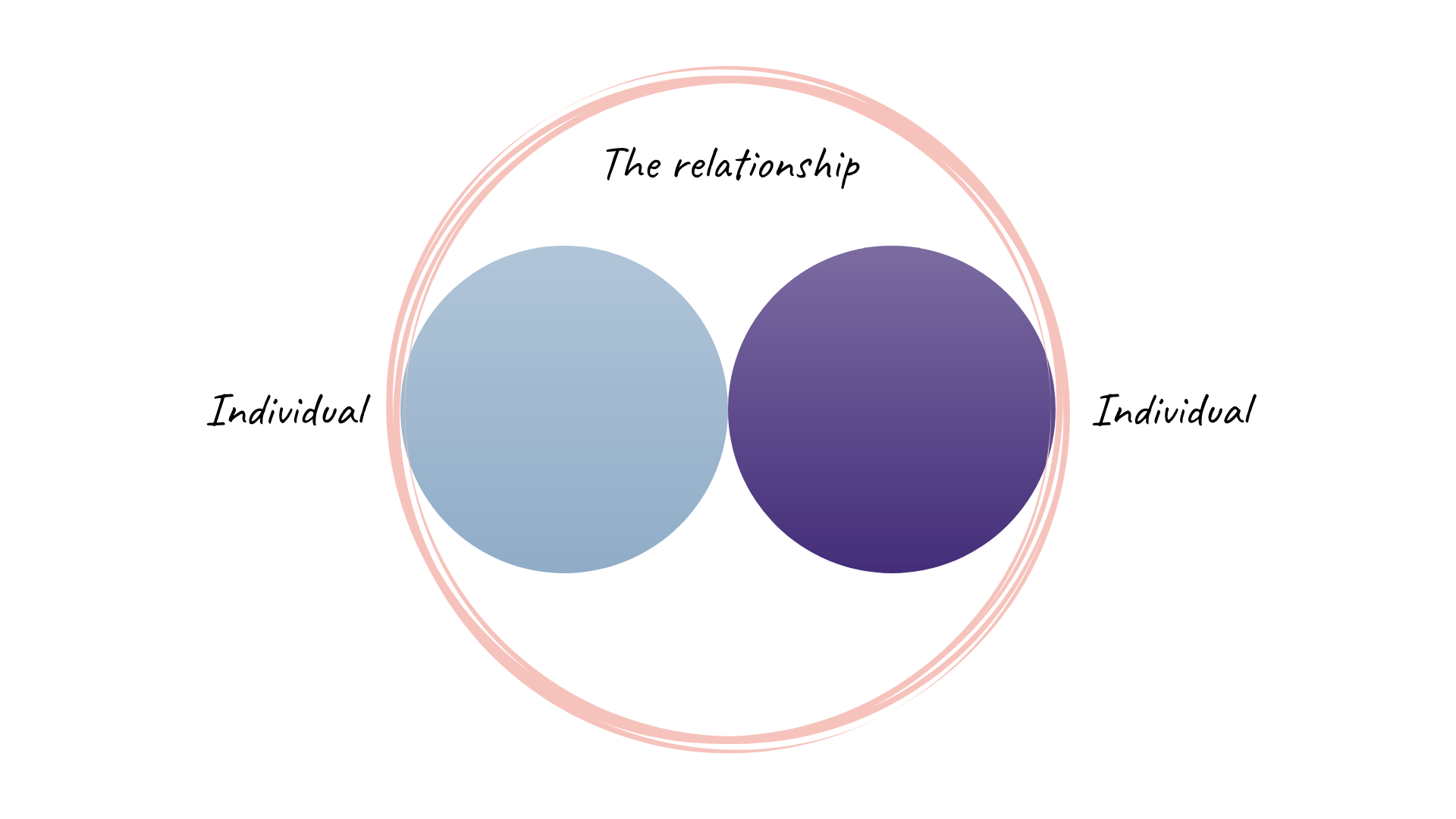 Can you see the difference? Can you find the trust needed to believe that the relationship you’re in has the power to contain you?

If we viewed our joined hearts in a way that allows each individual to be, while this pure being of ours is what our relationship is made of – we could both expand. Endlessly. We can add as many children into this portrayal, without cutting or removing “parts” of others, without molding one into the other until essential parts of each individual are gone. We could raise children into a world in which the lack of connection and the missing of togetherness are irrelevant – because they don’t exist.

When all individuals understand and agree that doing things alone is only easier until we figure out how to do things together; when these individuals are putting in the work needed to figure it out readily and willingly – it is then that they can, finally, build a new world around them and for them. 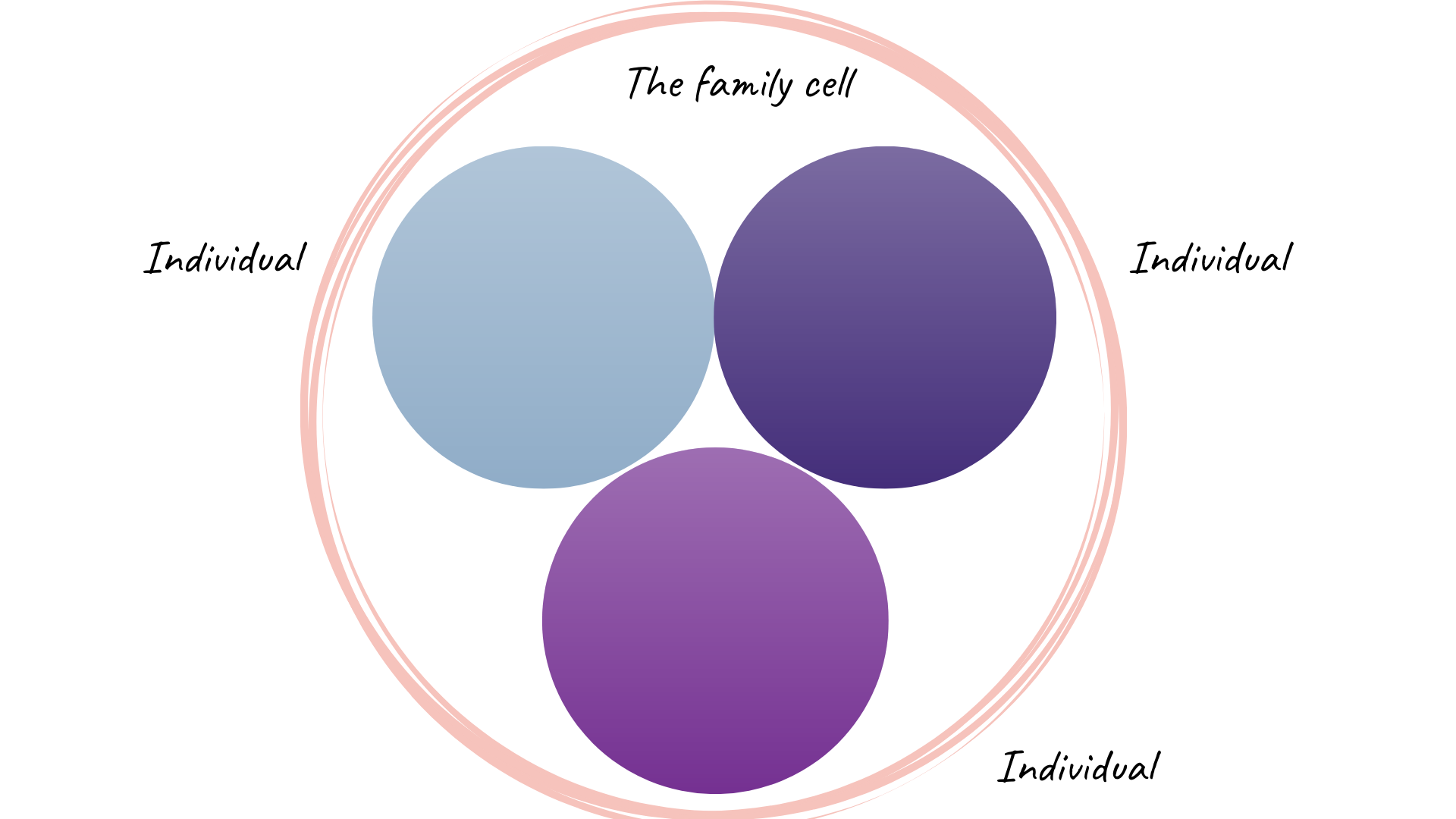 But it doesn’t start with the family cell as we now know it. It starts back with the couple. Because the definition of “family” doesn’t rely on the number of children you have, but rather – on whether you, the two of you, experience yourselves as two whole individuals who are willing to work to live the benefits of operating as a UNITY.

If you need help – there are various ways in which I’m able to work with you to strengthen all your relationships. You can email me at viki@parentsenlight.com or join my free life and parenting support group on Facebook.

Another thing you can do is join my TRIBE – the membership group I will be opening in February where we will be raising mindful children in mindful families – and will be doing it TOGETHER. 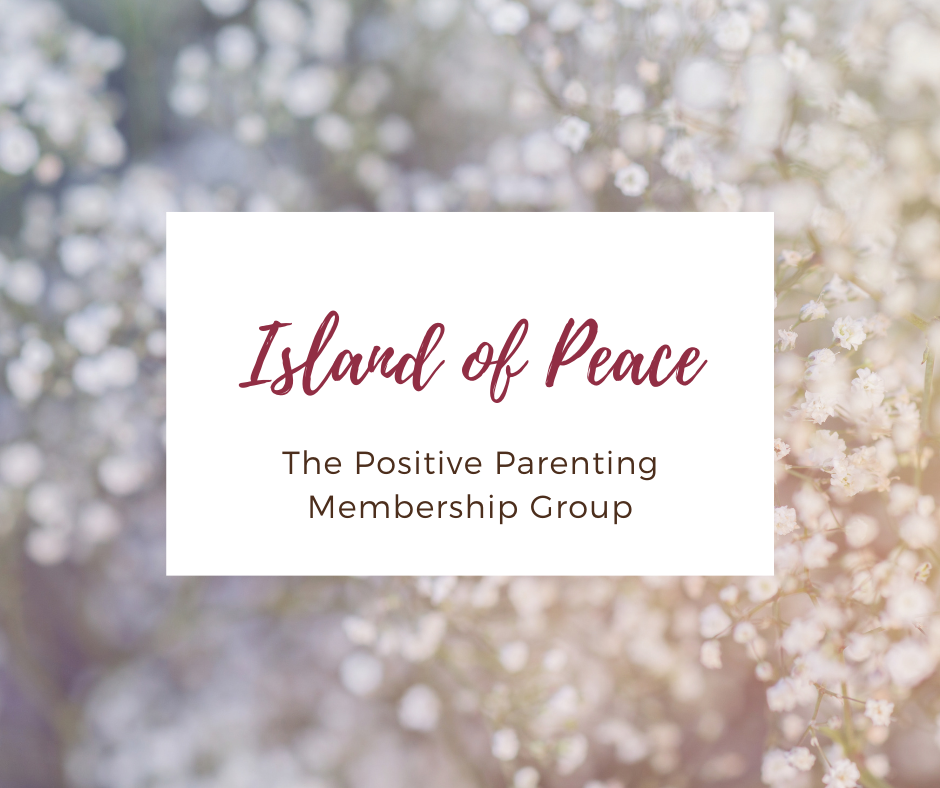 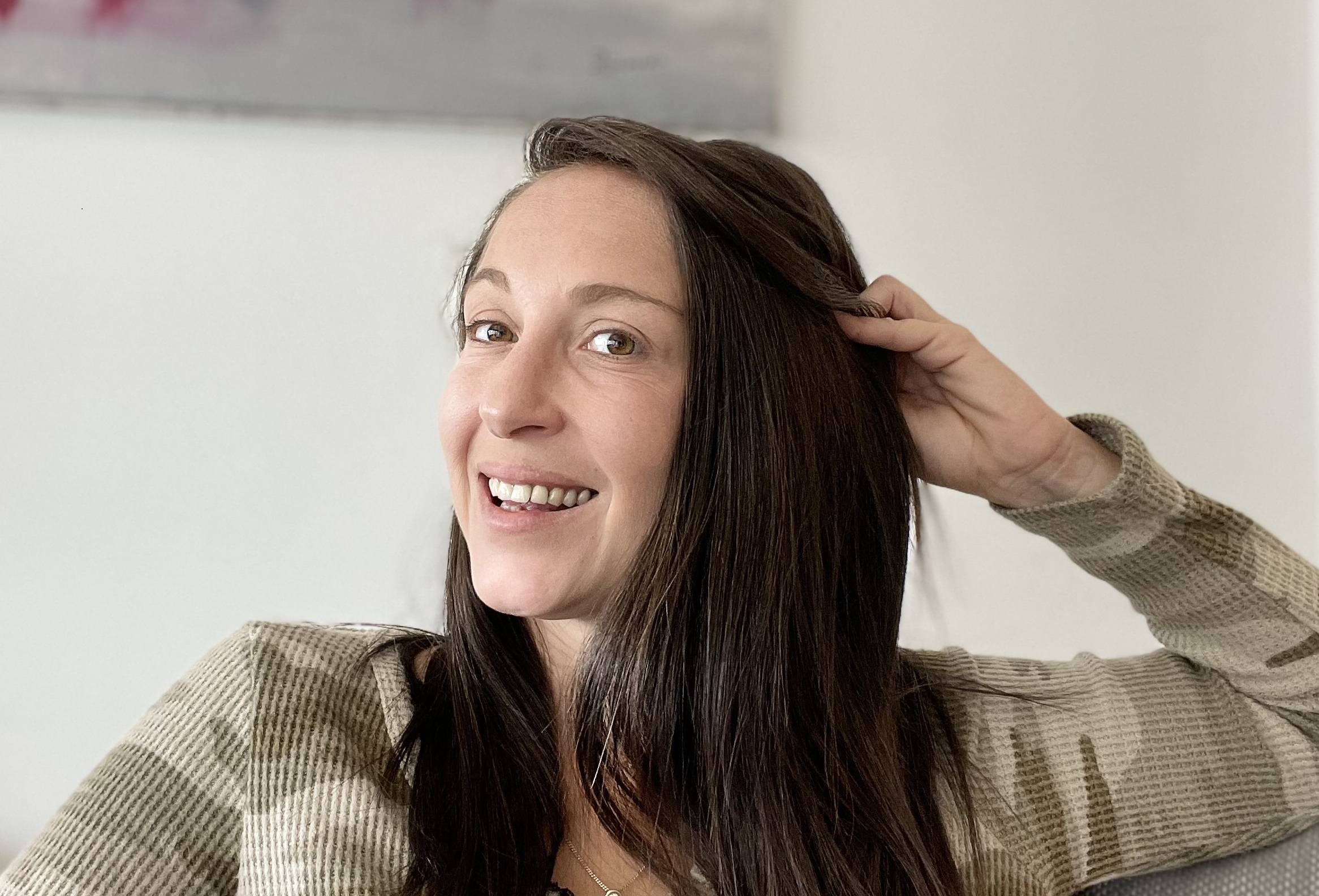